Hedge-Fund Manager Pledges $275 Million to Give Free Mental Health Care to Veterans
0
stdClass Object ( [error] => stdClass Object ( [message] => (#100) Object does not exist, cannot be loaded due to missing permission or reviewable feature, or does not support this operation. This endpoint requires the 'manage_pages' or 'pages_read_engagement' permission or the 'Page Public Content Access' feature or the 'Page Public Metadata Access' feature. Refer to https://developers.facebook.com/docs/apps/review/login-permissions#manage-pages, https://developers.facebook.com/docs/apps/review/feature#reference-PAGES_ACCESS and https://developers.facebook.com/docs/apps/review/feature#page-public-metadata-access for details. [type] => OAuthException [code] => 100 [fbtrace_id] => AunuJYNcJ-gRZZtSV5ambiq ) )

A Tribute to Robin Williams: Veterans Supporter and Philanthropist 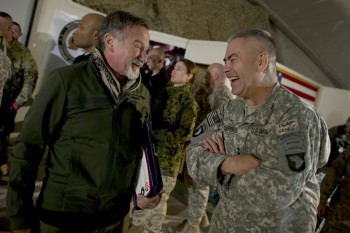 Like so many individuals around the world, Robin Williams brightened our lives with his comedic genius and heartfelt spirit. His death earlier this week saddened us beyond words.

What many people do not know is that along with his successful career in comedy and acting, Williams was also a passionate supporter of veterans and active duty service members. In fact, he did six entertainment tours with the USO, performing stand up comedy for soldiers in more than a dozen countries, including Iraq and Afghanistan.

“In a way, a joke is kind of like a bullet that can pierce somebody’s body armor — another comedian said that once,” said Rachel Tischler, vice president of USO Entertainment, “For him to go and tell jokes was a way to alleviate whatever experience a service member might be going through and break them out of that reality and make them laugh and forget about what they were facing.” (PRI)

Williams cared immensely about military members and worked for years traveling to war zones to make them laugh. From the Vets Vehicles family, we want to express our sincerest gratitude to Williams for his support of veterans and service members. He will be greatly missed by the military community.

To see one of Williams’ most memorable performances at Camp Arifjan in Kuwait in December 2007, watch the video below.