Hedge-Fund Manager Pledges $275 Million to Give Free Mental Health Care to Veterans
0
stdClass Object ( [error] => stdClass Object ( [message] => (#100) Object does not exist, cannot be loaded due to missing permission or reviewable feature, or does not support this operation. This endpoint requires the 'manage_pages' or 'pages_read_engagement' permission or the 'Page Public Content Access' feature or the 'Page Public Metadata Access' feature. Refer to https://developers.facebook.com/docs/apps/review/login-permissions#manage-pages, https://developers.facebook.com/docs/apps/review/feature#reference-PAGES_ACCESS and https://developers.facebook.com/docs/apps/review/feature#page-public-metadata-access for details. [type] => OAuthException [code] => 100 [fbtrace_id] => AG2o4CgVAR7u5Aj5A8NkNkY ) )

What to Read: For Love of Country 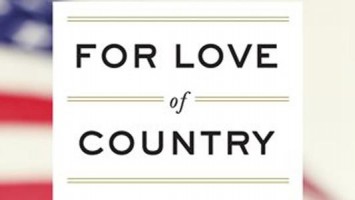 Two for our nation’s leading public figures have teamed up to write a book dedicated to veterans of the Iraq and Afghanistan wars.

Howard Schultz, chairman, president and chief executive officer of Starbucks Coffee Company and Rajiv Chandrasekaran, senior correspondent and associate editor of the Washington Post have written a book featuring the contributions of veterans in our nation’s most recent conflicts, both on the battlefield and on the home front.

For Love Of Country: What Our Veterans Can Teach Us About Citizenship, Heroism, and Sacrifice will include profiles of veterans who have committed acts of extraordinary valor in Iraq and Afghanistan and also veterans who are using their leadership skills to strengthen our nation. The book tells the story of an orthopedic surgeon who joined the war at the age of 60 after his son died fighting in Iraq and went on to save thousands of soldiers’ lives on the battle field. It also profiles countless veterans working to give back to our nation even on the home front: from the former soldiers working to turn around inner-city neighborhoods to the army spouses counseling fellow army wives whose husbands have sustained life-altering injuries.

“Given that less than 1% of our country has served in the military conflicts of the last decade, this is a time in America when it’s crucial to bridge the divide in our society between our civilian and military populations,” said Howard Schultz.

Schultz and Chandrasekan plan to donate the proceeds from the book to veterans service organizations working to help post 9/11 veterans and their families successfully transition back into civilian life. For Love Of Country will be published on November 4, 2014. See the book details below. For more information visit the announcement page at the publisher’s website.