Hedge-Fund Manager Pledges $275 Million to Give Free Mental Health Care to Veterans
0
stdClass Object ( [error] => stdClass Object ( [message] => (#100) Object does not exist, cannot be loaded due to missing permission or reviewable feature, or does not support this operation. This endpoint requires the 'manage_pages' or 'pages_read_engagement' permission or the 'Page Public Content Access' feature or the 'Page Public Metadata Access' feature. Refer to https://developers.facebook.com/docs/apps/review/login-permissions#manage-pages, https://developers.facebook.com/docs/apps/review/feature#reference-PAGES_ACCESS and https://developers.facebook.com/docs/apps/review/feature#page-public-metadata-access for details. [type] => OAuthException [code] => 100 [fbtrace_id] => AYtmz2n0JM5VdJScd5eFrB0 ) ) 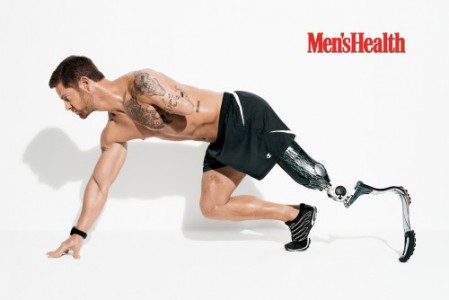 Disabled veteran Noah Galloway graces the November cover of Men’s Health as the “Ultimate Men’s Health Guy”. Thousands of men around the country submitted their stories to be considered for the 2014 Ultimate Men’s Health guy distinction and the magazine chose Galloway, showing that his story of resilience as an amputee veteran is relatable to all men and women.

In 2005, Noah lost his left arm above the elbow and left leg above the knee in an Improvised Explosive Device (IED) attack in Yusafiah, Iraq. After lying unconscious for five days, he woke up on Christmas Eve to find out he had lost two of his limbs and also sustained several injuries to his remaining leg and his jaw. In the blink of an eye, he went from a competitive athlete and fitness fanatic to a disabled veteran. For five years, he wallowed in his sorrows, staying home and drinking, smoking and sleeping. Then one day in 2010 he decided to pull himself back up. He resolved to start by getting back in shape, but he was embarrassed to be gawked at at the gym with his missing limbs.

“I joined the 24-hour gym and went at two in the morning, when no one was there. I was starting from scratch.”

Eventually, Galloway started racing competitively. He competed in the 2012 Marine Corps Marathon along with countless other marathons, 5k and 10k races.

Galloway says he’s honored to be on the cover of Men’s Health since it shows he is relatable to all readers. To read Galloway’s cover story, visit the Men’s Health website.