Hedge-Fund Manager Pledges $275 Million to Give Free Mental Health Care to Veterans
0
stdClass Object ( [error] => stdClass Object ( [message] => (#100) Object does not exist, cannot be loaded due to missing permission or reviewable feature, or does not support this operation. This endpoint requires the 'manage_pages' or 'pages_read_engagement' permission or the 'Page Public Content Access' feature or the 'Page Public Metadata Access' feature. Refer to https://developers.facebook.com/docs/apps/review/login-permissions#manage-pages, https://developers.facebook.com/docs/apps/review/feature#reference-PAGES_ACCESS and https://developers.facebook.com/docs/apps/review/feature#page-public-metadata-access for details. [type] => OAuthException [code] => 100 [fbtrace_id] => AHdCY00OArE26Tve__LFzAm ) ) 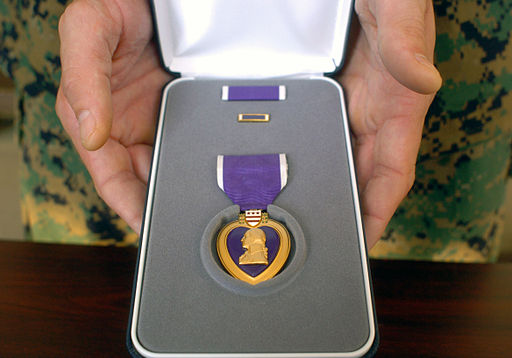 Today we salute all the brave men and women who have been wounded or killed in battle.

The Purple Heart Medal is awarded in the name of the President to those who have been wounded or killed in service. It is the oldest military medal in the world in present use.

Origins of the medal can be traced back to 1782 when President George Washington pinned heart-shaped purple cloths on a trio of Revolutionary War soldiers who had been injured in battle.

The official use of the medal began in 1932 with the founding of the Military Order of the Purple Heart, an organization chartered by Congress for combat-wounded veterans. That year also marked the first distribution of the enameled Purple Heart medal featuring Washington’s profile.

“The governor shall annually proclaim August 7 as Purple Heart Day and uge the people and organizations of the state to display the American flag on that day as a public expression of the recognition of those individuals who have been wounded or killed in action preserving the freedoms that all United States citizens cherish.”