Hedge-Fund Manager Pledges $275 Million to Give Free Mental Health Care to Veterans
0
stdClass Object ( [error] => stdClass Object ( [message] => (#100) Object does not exist, cannot be loaded due to missing permission or reviewable feature, or does not support this operation. This endpoint requires the 'manage_pages' or 'pages_read_engagement' permission or the 'Page Public Content Access' feature or the 'Page Public Metadata Access' feature. Refer to https://developers.facebook.com/docs/apps/review/login-permissions#manage-pages, https://developers.facebook.com/docs/apps/review/feature#reference-PAGES_ACCESS and https://developers.facebook.com/docs/apps/review/feature#page-public-metadata-access for details. [type] => OAuthException [code] => 100 [fbtrace_id] => A0kw8pmQ-Rs-tPbK8YY3QLF ) )

A Photo Worth A Thousand Words 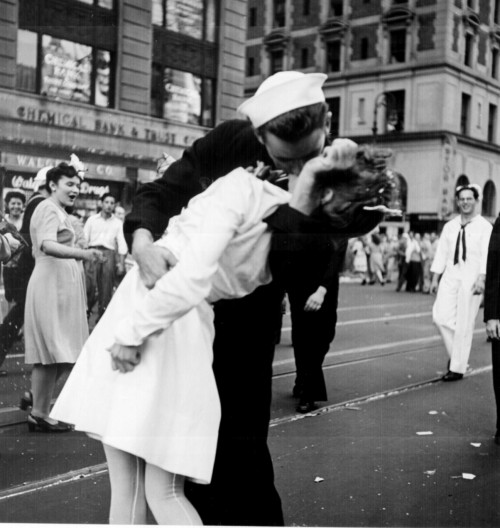 V-J Day in Times Square is a photograph by Alfred Eisenstaedt that pictures an American sailor kissing a nurse in Times Square on Victory over Japan Day, August 14, 1945. The photo is also known under the names V-Day and The Kiss.

While photos of kissing service personnel was a favorite subject by media photographers during the war, Eisenstaedt’s photo shows a spontaneous kiss that occurred in Times Square as the announcement of the end of the war against Japan was made by President Harry S. Truman. It became famous after it was published in Life magazine a week later.

During the enthusiastic celebration, Eisenstaedt did not have an opportunity to get the names and details of the man and woman in the photo. The image also does not clearly show the faces of either person. As a result, several people have come forward claiming to be the subjects of the famous image.

Eisenstaedt’s iconic photo encapsulates the spontaneity, energy and sheer exuberance of this day 68 years ago. It captures the feeling of the American public when it was finally announced, after a half decade of global conflict, that Japan had surrendered and WWII was over.

While V-J day is not formally recognized until September 2nd, take a moment today to mark the joyous feeling of this day 68 years ago and the sacrifices made by the World War II generation.